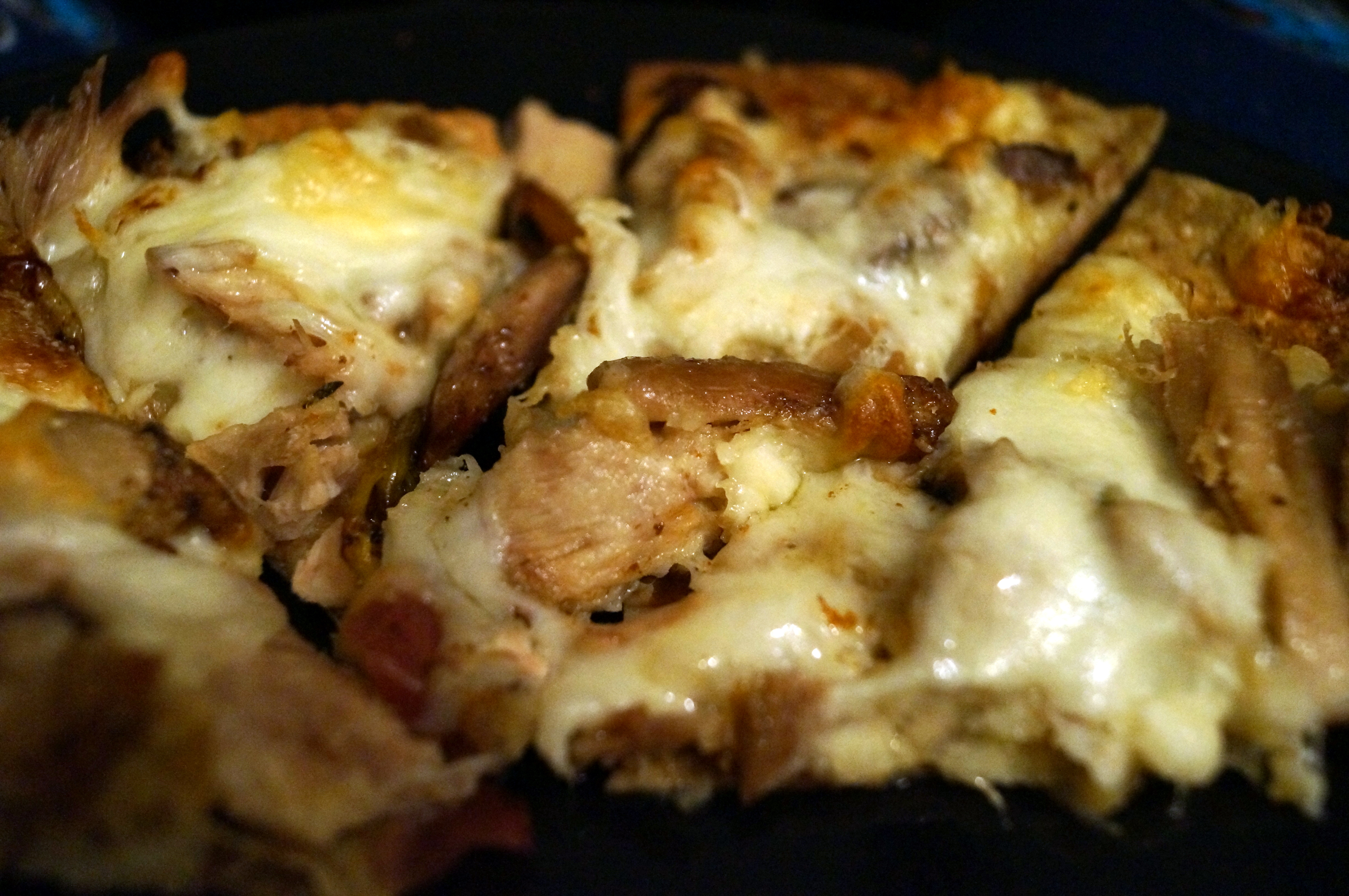 Did you ever have a recipe that you make just for the leftovers? I have one such recipe where the main dish comes out pretty good, but when the ingredients are re-purposed, magic happens.

I love cooking bone-in chicken. There’s something sterile and lost about cooking boneless skinless chicken breasts. They’re pure protein with little flavor, they dry out, and leak the white stuff if you turn away while you’re sauteing them. I do have a few recipes that do call for BSCBs, but there’s something majestic about bringing a chicken into your chicken. I love single pan recipes since they save on cleanup, and my new favorite single pan is a La Creuset that my parents got me for my birthday. I’ve wanted one for a decade now and it was worth the wait.

Preheat the oven to 350ºF. In the roasting pan, melt 2 tbsp butter into 2 tbsp of olive oil. Mixing fats raises the smoke point of the butter but retains butter’s browning power. Salt and pepper four chicken thighs and brown in the pan. Make sure that you move the chicken constantly to prevent bonds from forming between the chicken’s proteins and the surface of the pan. When the chicken is browned on both sides, move them off to the side of the pan and toss in a leek that has been trimmed, halved, and cut into strips.

When the leek is clear, shuffle out of the way and toss in some mushrooms to brown in the fat, when the mushrooms are done, splash with 1/2 cup white wine and deglaze the bottom of the pan. Chop up four new potatoes into chunks and toss into the pan. Season with 10 sprigs of fresh thyme, 10 peeled garlic cloves (left whole), 1 tbsp rosemary, 1 tsp pepper, 1 tsp paprika, and 1-3 tbsp salt (depending). Move the chicken thighs back into the middle of the pot and make sure that all the chunkies are evenly mixed and distributed around.

Pour 1/4 cup olive oil over everything and then cover with aluminum foil. Roast in the oven for 35-45 minutes, covered for the first 25-35 minutes and uncovered for the last 10. Let rest before serving. 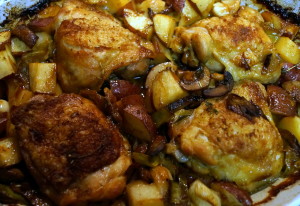 Now I alluded to the leftovers. There is magic in these thighs. Make sure you save the chunkies and the thigh meat. This was a dash of inspiration that was somewhat stolen from the Irish Pizza served by a pub in Harper’s Ferry. This is a dish that goes well with Guinness.

Preheat the oven to 425ºF. Get out some soft tortilla shells. Spread the chunkies out on the tortillas, mashing the potatoes and spreading the garlic. Pull the meat off of the thigh bones and shred. Sprinkle the meat over the mashed chunkies and then sprinkle a handful of mozzarella cheese over the whole deal.

Place on a parchment lined cookie sheet and bake for 10-15 minutes, until the shell is crispyish and the cheese is melted and bubbly.

Slice with a pizza cutter.